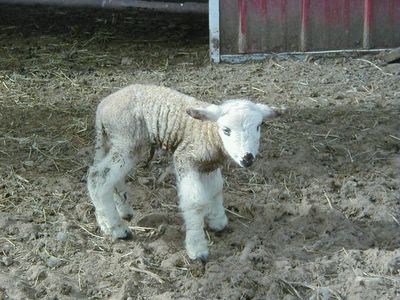 This little fellow was born sometime this morning and could not find his mother. He walked up to every ewe in the field like the little bird in P.D. Eastman's Are You My Mother, with no success. Convinced that he had been born to a ewe who had abandoned him, I decided to take him up to the house and start feeding him as an orphan. He was bleating as I carried him through the barn and much to our surprise, a ewe I had placed in a pen with another new lamb bleated back. Turned out our "orphan" had snuck through a gate into another part of the barn, and then out into the big world, while his twin sister was being born. Mother, son and sibling were happily reunited.