Why this blog is mostly about books and farming

The Orthodox Blogosphere is always embroiled in some controversy or other. I am often tempted join in but usually manage to restrain myself. Lately, when the urge becomes compelling, I squash it by thinking of this cartoon from Randall Monroe at xkcd.com:

It is the nature of my work that I meet people when they have problems.  I try and help with the ones that are potentially fixable in the legal system of the Commonwealth of Virginia.  As for the rest, well in spite of what we lawyers may say, the Courts don't have an answer for most of the difficulties that plague us in day to day life. To fix those you may try prayer, politics, or simply learn patience.  Or, you can join voices with like minded folks and try this.

Spring rains and an evening with a poet

Rain again today.  I would post a picture, but too much rushing around this morning and meetings until late tonight left no time.  It is finally quiet here at home, dogs snoozing on the carpet waiting for me to go to bed.  I am looking through volumes of Chinese and Japanese poetry, reading about Spring in an age past and half a world away.  This, by the Japanese poet Saigyo as translated by Burton Watson struck me tonight as I read in our mountain home:

Spring Showers in a Mountain Dwelling--written at Ohara

pouring down from the eves,

a place where someone lives,

Last night our little congregation stood outside in the mist and, raising our candles in the sign of the cross, proclaimed and celebrated the resurrection.  For the next forty days we greet each other with the best news a man or woman can hear; Christ is Risen!  Why is this so?  Here is the answer, taken from the Paschal Sermon of St John Chrysostom, read as part of the service:

Let no one bewail his poverty,
For the universal Kingdom has been revealed.
Let no one weep for his iniquities,
For pardon has shown forth from the grave.
Let no one fear death,
For the Savior's death has set us free.
He that was held prisoner of it has annihilated it.

By descending into Hell, He made Hell captive.
He embittered it when it tasted of His flesh.
And Isaiah, foretelling this, did cry:
Hell, said he, was embittered
When it encountered Thee in the lower regions.

To Him be glory and dominion
Unto ages of ages.

When we proclaim that Christ is risen, we share the news that all the fears and frustrations of daily life, that the crisis of nations and the plots and plans of politicians are all the last gasps of a dying order.  This truth supercedes what we read in the papers.  This is the news that there is hope and more than hope; that we can live now in the first-fruits of the new world.  Christ is Risen!

To read and hear the Paschal Greeting in 250 different languages, go here.

Saturday Shearing in the Barn 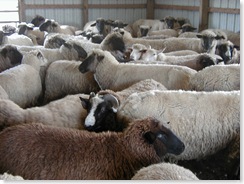 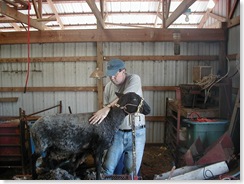 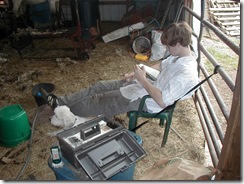 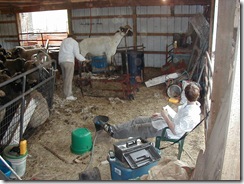 In Orthodox liturgics a new day begins at Sundown and so it is natural that services for the following day are often held by way of anticipation on the evening before.  Last night was the first of the Good Friday services, a reading of twelve selections from the Gospels recounting the Passion, that is the arrest, trial and crucifixion of the Lord.  In between the Gospel readings we sang hymns and verses meditating on the wonder and paradoxes of what is taking place in that liturgical time of the service which places us simultaneously in Palestine and the present.  Here is an Antiphon we sang which seem to follow with the theme of water that has been cropping up in my posts this week:

Today he who hung the earth upon the waters is hung upon a Tree, (x3)

He who is King of the Angels is arrayed in a crown of thorns.

He who wraps the heaven in clouds is wrapped in mocking purple.

He who freed Adam in the Jordan receives a blow on the face.

The Bridegroom of the Church is transfixed with nails.

The Son of the Virgin is pierced by a lance,.

Show us also your glorious Resurrection.

The full service as translated by Archimandrite Ephrem Lash can be found here.

The One who made lakes and springs and seas, instructing us in surpassing humility, girding himself with a towel, washed his disciples’ feet, humbling himself in the abundance of his compassion and exalting us from the depths of wickedness, he who alone loves humankind.

From the service for Matins (Morning Prayer) on Holy Thursday 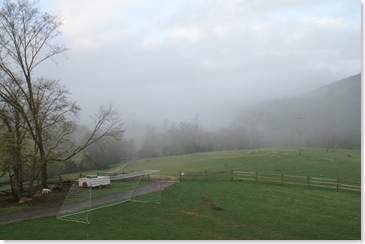 The Promise of Spring

And I heard noises outside my window this morning and looked out and the wind was swirling the dead leaves. I turned the heater on for the first time this year, and somewhere reported the first snow of the season.

This reminder of the reversal of seasons that comes from living on different halves of a big round ball mixed with the last few days of rain and brought to mind one of my favorite songs; The Waters of March/Águas de Março, by Antonio Carlos Jobim.  Jobim wrote two versions of the song.  The Portuguese original is a stream of consciousness meditation inspired by the rains of March, which in Brazil signal the end of summer.  The second, English, version is not so much a translation as a Northern hemisphere adaptation.  Here is a bit from the lyrics:

Reading the lyrics does not do justice to the song, with its deceptively simple syncopation and sweet but melancholy melody.  I counted yesterday and discovered that I own five versions of the song by different artists.  I did not plan this, it is just that I find myself listening to a lot of bossa nova lately.  Perhaps it is the combination of beauty and sadness in the best of it.  Perhaps it is just an urge to listen to music made by grown ups for a change.  The Orthodox theologian David Bentley Hart maintains in his The Beauty of the Infinite that "Bach's is the ultimate Christian music; it reflects as no other human artifact ever has or could the Christian vision of creation."  This is no doubt true for the big picture.  I see Bach as like the physics and higher math of cosmology and quantum mechanics.  It is true and it is beautiful but it describes a world both bigger and smaller than the one we humans live in.  Here on the human scale the math gets messy.  Coastlines are fractals.  Swirling waters and weather patterns are non-linear, defying easy prediction.  Even the human heart beats chaotically and a "perfectly regular heartbeat is more likely to presage sudden death than good health."  Jobim's little bossa nova about the change of seasons, be it North or South is not Bach, but, for me at least, it speaks of the underlying beauty amidst the ten thousand seemingly unconnected details found in any day in any life if you stop and look around.  Not a meaningless chaos then, but something more:

A float, a drift, a flight, a wing
A hawk, a quail, the promise of spring
And the river bank talks of the waters of March
It's the promise of life, it's the joy in your heart

In the Orthodox Church Calendar yesterday was Palm Sunday, the beginning of Holy Week.  Pascha, as we call Easter, is much later this year than the Western celebration, late enough in the season so the redbud is in bloom and the grass in our fields has turned from winter brown to green.  Here is the view from home this Monday morning in Holy Week. 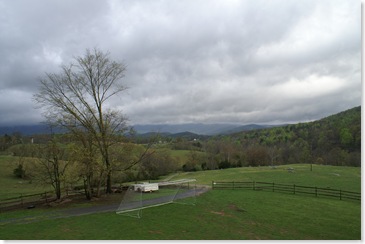