Telford Work has returned to blogging after a move to the west coast. Until I can add him back to the link list on the left, you can find his theological meditations here.
Posted by John S. Bell at 8:20 PM No comments:

Between family, farm, job and the kids' return to school, there hasn't been much time for blogging. I do have a few things in the works which will get posted later this week. To those who have written me or left comments, my apologies. I will get back to you in the next couple of days. In the meantime, here is another picture, looking out to the south. It was taken last summer during a dry spell and doesn't do justice to the look of the place now after the rain last week. The days still feel like summer, but nights and mornings have a certain slant of light that hints of autumn. There is a moment near sunset when a rush of cool air pours down from the mountain and the heat of the day vanishes as everything is lit up by the last burst of sunlight over Buck Mountain. Who could want more? 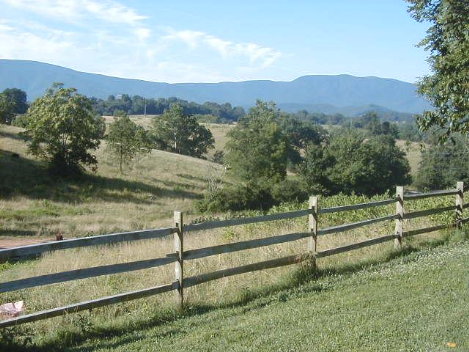