This past Saturday older and younger son and I, with the aid of a family friend, caught up on a number of farm chores that had been accumulating over the past few weeks. The rounding up of the flock went well with a single exception. When I got back from a quick run into town for supplies, friend and sons informed me that one particularly energetic lamb had split from the flock, jumped the cattleguard and headed down Browntown Road. The question put to me was whether we should chase the prodigal or just wait for his return while we worked with the rest of the flock. With visions of squealing brakes and crunching bumpers in my head, I led the crew out to search. We found the escapee about a quarter mile away, standing behind an old church which is now "The Freedom Club," an AA meeting house. The lamb had apparently taken the name to heart, because as soon as he saw us, he dashed into the woods behind the building, down a stream embankment and waded across Gooney Creek. We followed, splashing and sliding over slick stones. Two of us went left, two right and tried to surround him. The lamb, faced with imminent capture, surprised us all by bolting straight up the side of Buck Mountain and disappearing into the heavy underbrush.

At that point, tired, wet and with the day slipping away we returned to the rest of the flock. The next day, after hearing a report that the fugitive was back down by the creek, we headed out again. After the previous day's adventure I was ready to leave him be and let him grow into a local legend, "The Wild Sheep of Buck Mountain," but it was Sunday and the words of Matthew 18:12 were murmuring in the back of my mind: "What do you think? If a man has a hundred sheep, and one of them has gone astray, does he not leave the ninety-nine on the mountains and go in search of the one that went astray?" We set out , trying to track him by hoof prints and deposits thoughtfully left on the lawn of the vacation lodge on the other side of the creek. Again to no avail. We trudged back in defeat, ready to plan the next campaign when my mother-in-law came up and told us that, while we were trudging around, the lamb had come back across the creek and a neighbor had chased it back into our pasture. I decided then that I was not a Good Shepherd by any biblical standard, because at that moment I truly, truly could not "rejoice over it more than over the ninety-nine that never went astray."
Posted by John S. Bell at 7:57 AM No comments: 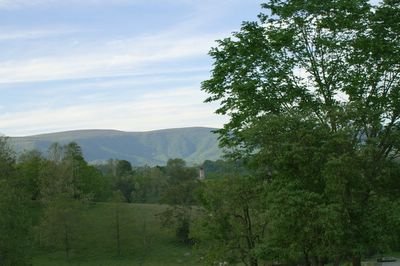 The view from home this morning.
Posted by John S. Bell at 7:33 AM No comments: