I heard the announcement of the death of John Paul II this afternoon while heading over Chester Gap on the way to pick up sheep feed at the Rhappahanock Co-op. Driving home in the rain with the smell of molasses and rolled corn rising from a dozen feed sacks, I listened to outpourings of grief and heart-felt tributes from across the world. I will not attempt to summarize the legacy of this great man, but will instead simply quote some lines from his book Crossing the Threshold of Hope:

At the end of the second millennium, we need, perhaps more than ever, the words of the Risen Christ: "Be not afraid!" Man who, even after the fall of Communism, has not stopped being afraid and who truly has many reasons for feeling this way, needs to hear these words. Nations need to hear them, especially those nations that have been reborn after the fall of the Communist empire, as well as those that witnessed this event from the outside. Peoples and nations of the entire world need to hear these words. Their conscience needs to grow in the certainty that Someone exists who holds in His hands the destiny of this passing world; Someone who holds the keys to death and the netherworld (cf. Rev 1:18); Someone who is the Alpha and the Omega of human history (cf. Rev 22:13)-- be it the individual or collective history. And this Someone is Love (cf. 1 Jn 4:8, 16)-- Love that became man, Love crucified and risen, Love unceasingly present among men. It is Eucharistic Love. It is the infinite source of communion. He alone can give the ultimate assurance when He says "Be not afraid!"
Posted by John S. Bell at 9:08 PM No comments: 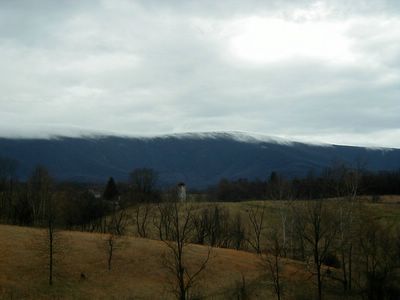 Rainy morning
Posted by John S. Bell at 10:22 AM No comments: