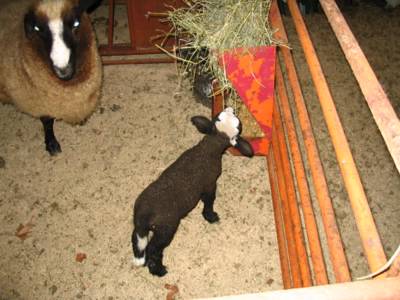 The first lamb of the season. The mother behind him is not actually possessed, though she is a little irritated. Lighting is tricky in the barn and the digital sometimes needs a flash fill when shooting in the dimmer corners. Unfortunately no one seems to have an automatic sheep "blue-eye" removal setting.

Posted by John S. Bell at 1:19 PM No comments: Links to this post 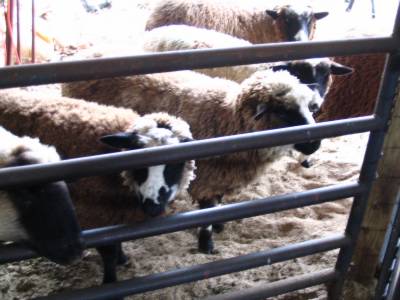 Sheep in Afternoon light
Posted by John S. Bell at 1:05 PM No comments: Links to this post

Yesterday was a beautiful day, unseasonably warm and just right to finish the job of taking down the old barbed-wire fence. After much delay and a few attempts to sneak back to the new video game, I finally got older and younger sons motivated and out by the long drive leading to the in-law's house. The wooden posts for the new fence were already in the ground, waiting for new wire mesh to be stretched tight from post to post. The old fence was a scraggly ad-hoc affair consisting of four strands of rusting barbed wire on short metal posts. The sheep had taken to going though it like ghosts walking through walls. Like ghosts, they had also taken to appearing in places where they were neither wanted nor expected. Hence the new fence. We took down a few individual strands to save for later use, but there was more old wire than we wanted or needed to salvage. The oldest started rolling strands together in a ball as the youngest and I unclipped the wire from the old metal posts. The further he rolled, the larger it got, until he was struggling behind a waist high ball of barbed wire, like a snowball from some metallic storm. The last post came out of the ground with the sun setting over Hogback mountain. We drove up to the in-law's house, old posts rattling in the back of the farm truck, tired and hungry and ready for my mother-in-law's New Year's Day dinner.