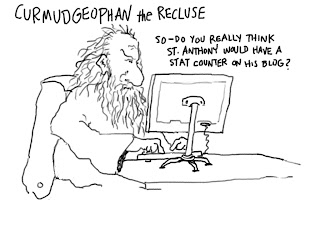 Back in June of 2008, following a recommendation from Father Thomas Hopko, I tried to blog about each of the thirty-eight sayings of Abba Anthony. I made it to number four before setting aside the blog for a year. A few people followed the series, short as it was, drawn by the words of the Saint rather than anything I had to say. Over at Ora Et Labora the author responded to to Father Thomas' challenge by taking the wiser course of posting all thirty-eight sayings without comment. Go take a look.
Posted by John S. Bell at 11:06 PM No comments:

Comes under the heading "Too true to be really funny."
Posted by John S. Bell at 10:13 AM No comments: