Small Matters of Life and Death

With the nighttime temperature below freezing, we try and get the ewes close to lambing into the barn at night. Monday night two stayed away. Susan was in Winchester doing some last minute Christmas shopping. I was caught late at the office making a last ditch effort to salvage a case that was doomed from the start. (Me: "You mean your only evidence against this guy is the testimony of a juvenile who himself is a thief as well as being a lying sack of [insert rude term for organic fertilizer] and who will plead the 5th if I put him on the stand?" Officer: "Yep, that's about right." Me: [insert colorful barnyard metaphors] ) What with one thing and another, I did not get home until well after dark. I called the ewes from the lower field in and thought I had them all. Just after sunrise Tuesday, I saw two ewes standing by the barn with something small walking between them. After putting the dog in the house, I went back to let them in and found the lamb I had seen before, plus two more I hadn't. One was frozen, laying lifeless where he was born. The second was still breathing, stretched shivering on the frozen mud, her skin covered with a delicate layer of frost. After alerting the rest of the family, I brought the survivor up to the house where a box with a heat lamp was ready. Last night Susan took her down to the barn and put her in a pen with her mother. The past two nights we have been careful about counting heads. They are so fragile, yet sometimes unexpectedly resilient. Why did one live and one die? I don't know, but here is a picture of mother and daughter, reunited, warm and sheltered. 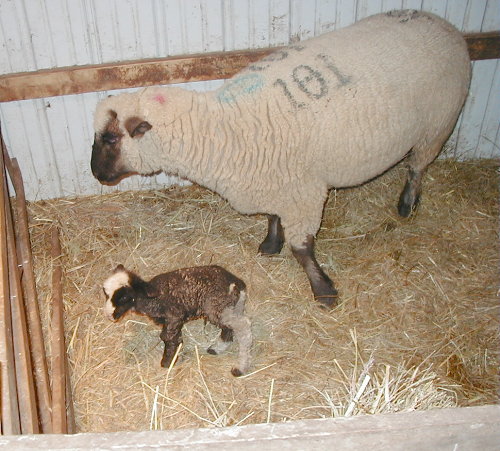