The leaves are a bit past peak now. High winds yesterday took them from tree branches and sent them swirling around the house and barn. Here is the view looking east towards Skyline Drive Sunday afternoon. 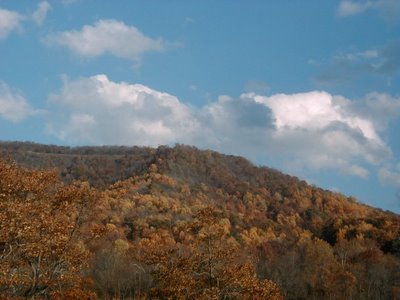 We have an old dog who's sense of time is slipping. He woke me up at 2:00 a.m. whining to go outside. When I opened the door I heard dogs barking in the pasture, at least one low loud bark mixed with the high pitched yapping of smaller dogs. To a shepherd, these are not comforting sounds. They are the kind of sounds that mean sheep running in a panic through the fields and seeing vultures circling in the morning. After letting the old dog back in, I headed down through the barnyard with flashlight and rifle in hand. Four ewes and the llamas were waiting by the barnyard gate, agitated, but unharmed. After herding them through into the field closest to the house, I walked up the hillside, swinging the light over the fields as my eyes adjusted to the dark. The sound of the neighbors' dogs echoed off the hillside, but our trespassers had lapsed into silence. One quick glimpse of glowing eyes retreating towards the woodline, and they were gone. I waited for a while the under the night sky, moonless and star-filled. Finding Orion, then the Dippers and the Pleiades, I listened again. Hearing nothing, I headed back to the lights of home.
Posted by John S. Bell at 6:44 AM 2 comments: Links to this post

Fall color, frost and a slice of morning sun. 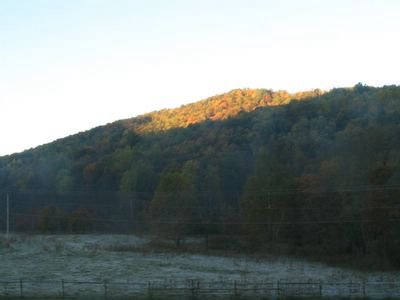 Posted by John S. Bell at 7:13 AM No comments: Links to this post 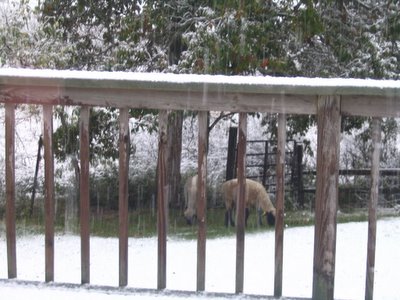 Here is another picture from last week's sudden snowfall that left us bemused and the sheep in search of any bare patch of grass. One ewe, bottle-raised and still convinced that we are her flock, stood by the door befuddled by the change and loudly complaining. The snow left as quickly as it came, followed by a succession of Indian Summer days, the slanting light on the newly green grass somehow reminiscent of Spring in spite of the fall colors around us. We know though that Winter is on its way and soon enough Spring will be both a hope and a distant memory.

Here is a poem from Wendell Berry's latest collection in praise of the lushness that this last week has been an echo of:

The woods and pasture are joyous
in their abundance now
in a season of warmth and much rain.
We walk amidst foliage, amidst
song. The sheep and cattle graze
like souls in bliss (except for flies)
and lie down satisfied. Who now
can believe in winter? In winter
who could have hoped for this?

Posted by John S. Bell at 6:10 AM No comments: Links to this post