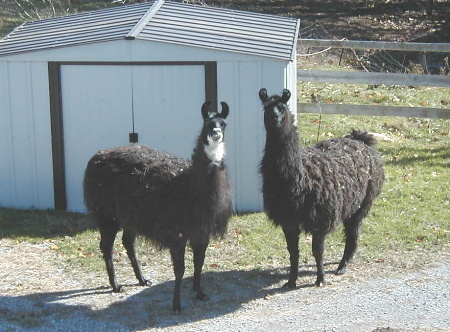 The gentlemen staring back at you from our driveway are Tippy and McKenzie. Tippy is on the left, Mckenzie is the dark faced fellow on the right. They are llamas, a South American animal, that looks, as you can see, like a camel crossed with a deer, and then dressed up in a thick wooly coat. They are supposed to be working for their living, guarding sheep from dogs, coyotes and other neighborhood ne'er do wells. Instead, they have discovered how to jump the cattleguard into our yard, where the grass is tastier, and there are rose leaves for dessert. You can find them on a sunny afternoon stretched out full length on the lawn, idly chewing, looking for all the world like sunbathing Eurotrash waiting for the cabana boy with the next round of drinks.

This morning they discovered they could use their jumping skills on the cattleguard at the end of the driveway on Browntown Road. I was moments from getting in the shower when a neighbor showed up to tell us that we had llamas on the loose. The pair had made it down the road to the house of another neighbor on Gooney Run and were munching on his grass. This was not satisfactory to us, the neighbor, nor to the morning commuter traffic nearby on Browntown Road. If you live off a two lane stretch of asphalt like we do, you soon realize their are only two types of drivers; old folks plodding down the road no faster than twenty-five, and younger types making an attempt on the sound barrier. The thought of two llamas in the road as a Ford F-150 rounds the turn at sub-orbital velocity was too grim to contemplate. One son and I chased them up out of the yard and across the road while Susan played crossing guard. I followed them down the in-law's driveway in my own truck until we could route them through a gate in the fence, some 50 acres away from where they started. After going through the gate, they began to recognize their own field, and looked at us like we had performed some kind of magic trick. Since they were in the same pasture as the sheep they were supposed to be guarding, we figured it was a job well done. This evening they were waiting for us, back in the front yard.
Posted by John S. Bell at 9:37 PM No comments: Links to this post

Bishop Seraphim describes his drive through a "New England festival of color . . . One could do worse than to imagine Heaven in terms of a New England, or Hudson Valley village in the Fall". Here further south in the Appalachians, we have our own, smaller, festival; in my eyes no less beautiful. It is customarily greeted by lines of cars from the D.C. suburbs backed up waiting for their turn on Skyline Drive. I don't mind. As the Chinese Poet, Po Chu-I put it;

"Beautiful places basically have no established owners;
in general, mountains belong to people who love mountains." 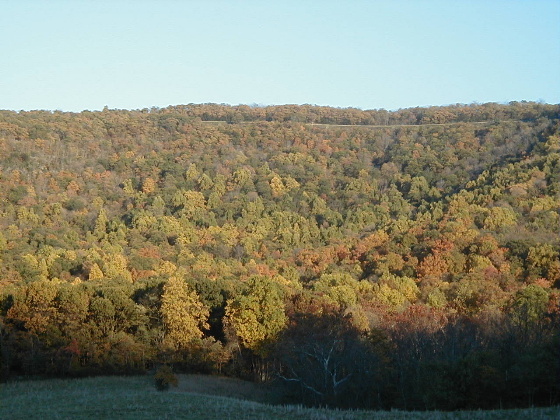 Oh to have a home
In such a quiet leafy spot,
Yearns the city man;
Yet he never builds a hut in mountain country.
Okuma Kotomichi from Donald Keene's Anthology of Japanese Literature
Posted by John S. Bell at 9:19 PM No comments: Links to this post